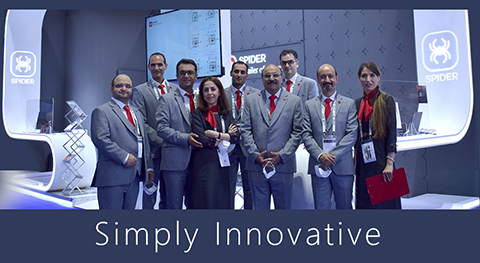 Years of continuous research and development coupled with practical on-site work culminated at a structural engineering software package, which presents you with what you are looking for at a single click.

Spider, our software for detailing concrete high-rises, is the result of more than 200,000 man-hour work. It has thousands of happy users and has been in the market for 20 years. And that means every aspect of this software is checked, tried and tested many times and is now ready for you to enjoy.

But ... This has not been a simple over-night success for us! Please listen to our story.

The First Idea (1991-1995) We were a team of construction engineers planning, detailing, and constructing structures of various types in both steel and concrete. Business was thriving and we had many construction projects all the year round; the problem, though, was that it took us very long time to detail construction layouts manually, and we needed to consider hundreds of different criteria, which was a true nightmare and still we could not imagine that there would even be any way to deal with that big problem.

On the other hand, back in 1980s, we started to “enjoy” desktop computers and AutoCAD, the powerful software in engineering, which was the starting point to say goodbye to the old pen-and-paper detailing method. This was a marked improvement for any construction engineer to detail their layout on a computer since it could do the job much faster, neater and more accurately.

Software in Embryo (1996-2000) Because we were a team of construction engineers at the time of developing Spider subroutines, we had just our after-work free time to put on programming them, yet we were trying to implement our on-the-site experience into the software. Frankly, our first expectation of the software was something that could just detail construction layouts automatically, and we would be super-happy if that dream came true because this could reduce our calculation time by more than 80% compared with the manual system back then.

First Version (2001-2005) Finally, in 2001 and after nearly 10 years of hard work, the first version of the software was launched and could luckily attract many engineers in the field to itself. The more the users, the more the need for developing the software in different areas; therefore, we set out to implement new functionalities and capabilities in the software and always tried to better it both in terms of its functions and its speed.

Spider to Make the Global Leap (2014-2018) Preparing the software for the international launch required substantial effort because hundreds of areas needed modification in order to comply with the international standards of construction around the world. Fortunately, from the first stages of preparation, the software was prepared based on ACI, the most widely used code around the world. This meant the software could be nicely in harmony with most construction codes in different countries.

Besides the technical issues of construction, we also needed to prepare our support and maintenance teams, which were proficient in both using Spider and providing 24/7 support for the valuable clients from all over the world.

In order to enter the global market, there was also work to take care of in our IT department, website preparation team, legal document preparing team, and content team to prepare all the software media, user manual, tutorial demos, and client contracts. The result of all this work is Spider that now offers the structural engineer irresistible advantages at work.

Spider in China (2019) Spider entered China in 2019, where it has been used for international projects done by Chinese companies. From there, the software soon started to be known in the countries of Southeast Asia. High-rises springing into the wild sky were thirsty for such a product, which can simply do the detailing procedure “in two shakes of a lamb’s tail”. There was just one adjustment needed for the companies there; they needed the Eurocode, which we added to the software, and now Spider covers both ACI and the Eurocode.

Spider in the BIG5 Dubai (2021) Another highly potential region for Spider to spread its constructive web was the Middle East. The BIG5 Dubai was the exhibition to show this software to the construction society of the MENA region and GCC countries. Luckily for us, the unanimous response from the visitors confirmed our idea that Spider was the missing link in the construction industry of the UAE and countries of the Gulf region. They had no problem with the design and analysis of projects; for detailing, however, they did not have any software to rely on. Spider was warmly welcome in the UAE because of its unique features in detailing steps of the construction procedure.

Spider, a Wise Choice This Canadian corporation prides itself in winning its users’ trust and loyalty internationally. Strong customer protection rules of Canada coupled with total commitment on the part of the company staff have contributed to the reliability of this software package. This Leaf from the Land of Maple will definitely live up to your expectations in detailing multi-story concrete structures and taking the burden off your shoulders. Come and join other Spider users in every continent you are or just request a demo; we will show you the great detailing features of the software.